Our American Vengeance MOAB Bomber shirt celebrates the drop of the MOAB (Massive Ordnance Air Blast‚ or nicknamed ‚Mother of All Bombs‚) bomb on ISIS Terrorists in Afghanistan. The MOAB was dropped for the first time on April 13th, 2017. The MOAB is the most powerful non-nuclear bomb in the US arsenal.

American Vengeance, fueled by liberal tears and served right up their ass!

I would gladly also pay for this shirt used or new hope there be one out there looking for 3X or 2X, thank you.

Good morning, We are unfortunately not reprinting the original American Vengeance design, because it has been redesigned and it is now available in an updated design. You can find the new American Vengeance 2.0 design using the link provided. Thank you! https://warrior12.com/collections/t-shirts/products/american-vengeance-2-0

G
Greg Bassignani (New York, US)
I Want This Shirt

I have ordered several Warriors 12 products. They do not have this shirt in production. I would gladly purchase a used one in good condition from anyone willing to part with theirs. XL is needed.
GregBassignani@Gmail.com 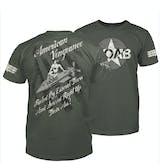